It is the last Saturday of the football league season, well sort of; in fact it is one of two last Saturdays of the football season and a last Sunday. Thanks to the need to create a television extravaganza out of the resolution of the promotion and relegation places the third division finished last Sunday, the second division finishes with noon kick-offs tomorrow and the fourth division finishes today with all the games kicking off at five-thirty, a time when most civilised people should be thinking about what they’re having for tea. The first division (I think they call it the Premier League nowadays) finishes I don’t know when and I don’t care; I don’t suppose Leicester will be winning it this year though, it’ll be back in the oily grasp of one of the usual cartel no doubt.
It’s a bit of a grey uninteresting day for the time of year, but with the occasional burst of sunshine, which conveniently is how I would sum up the season I have just witnessed following mostly Ipswich Town and Colchester United. I take the train to Colchester sitting across the gangway from of a man in a sports jacket and jeans and neatly coiffured hair and his female companion who is dressed similarly, but her jacket is more tailored and the jeans more tapered and a bit too tight if I’m honest; it’s not a look I would endorse for either of them, if asked. I sneeze from the effects of their perfume and body spray which mingle poisonously.

Arriving in Colchester I make the short walk to the Bricklayers Arms and drink £7.30’s worth of Adnams Oyster Stout, which sounds a lot when written like that. I drink one pint indoors and one in the garden, where I risk lung disease from the smokers. The pub is busy and I joke with the bloke on the table next to me about how long he is going to have to wait for his mate to come back with another beer. Eventually everyone is drinking and talking football. “He’s a good player that Alves”… I like that Spanish football”…. “Still a lot of diving though”…”That Luiz, wasn’t he good at free-kicks?” …”Yeah, he scored a good one earlier in the season” ….” Who’d he play for before then?” ….”PSG and Benfica”. Worn down by the conversation people clear off to get the bus to the Weston Homes Out In The Middle of Nowhere Stadium. As I leave the pub a bill board of Pierce Brosnan

makes me laugh out loud as I recall his Texan accent from a trailer I saw for his new BT TV epic serial; but with his bushy grey beard he just looks a bit of a twat too.

As I get to the bus stop I’ve just missed one bus, but having parted with £2.50 I get to choose whatever seat I want on the top-deck of the next one.

This bus soon fills up and then we’re off and then we’re there; it’s not far. A young lad in the seat behind me is incredulous as the bus draws up outside the stadium and he sees the car park and crowds beyond. “Cor! That’s really good for League Two” he says with the enthusiasm of youth. “Yeah, but it’s all glory hunters today innit” replies his slightly older and more worldly wise friend and indeed the older boy is right. Having struggled by on gates on three thousand for most of the season , there are more than twice as many here today (6,565 is the official figure) as Colchester have a chance of making the play-offs, along with about half the other teams in the division.

After purchasing a programme (£3) I join one of

four long queues into the South Stand, standing behind a fat man with a very growly voice. At the back of the stand on the way from the bus stops a man in uniform with a little green Land Rover is recruiting for the Army. It seems a bit unfair to try and recruit from Col U fans who it seems are already an endangered species without actively putting them in harm’s way. I don’t suppose we will be hearing “Billy don’t be a hero” played over the public address system this evening.
The queue moves slowly, and finally at the third attempt my bar-coded ticket unlocks the turnstile. After using the minimalist, almost “Scandi-style” stainless steel and breeze-block urinals I take up my seat not long before the game kicks-off. The game begins, I watch the opening exchanges carefully, intently even, but then see a steward I know who is peering up into the stand, looking for ‘troublemakers’ most likely . She sees me too and we give a little wave diffusing the intensity of the start of the game. Phew.
The atmosphere today is atypical of a Col U match; I can’t hear those echoing calls from lone voices abusing the opposition and giving quirky encouragement; if they are here they are lost in the murmur of an additional three and half thousand voices,

people unfamiliar with the etiquette that demands you sound off at football. It’s not a bad game though and Col U are looking the better team and with a half hour gone that provokes one spectator, presumably anxious about a play-off place and therefore frustrated that the U’s haven’t scored yet, to break ranks and shout critically “we’re going backwards”. In England the concept of just keeping possession of the ball is still one that a lot of people struggle with.

Then, at about five past six, a space appears, enough to allow No 31 Tarique Fosu-Henry a clear sight of the Yeovil goal; he shoots, he scores and Colchester are winning and for the time being are in 7th position in the league, and in the play-offs.

“Layer Road” is all of a quiver now and a few people are on their feet whilst the stewards gather at one end of the stand to quell any over-excitement. 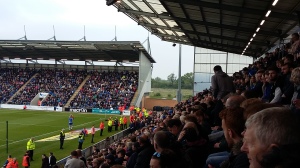 Fifteen minutes later and the voice from the public address system still sounds unfeasibly excited as he announces that the fourth official has indicated there will be at least 2 minutes of added on time to be played before it’s time for a cuppa.

With the half-time whistle I dash back to the Scandi-lav just in time to have to avoid a collision with a woman turning around and rushing out in a state of sheer panic. She’d taken a wrong turn, I guess, I hope. Having left the khasi and then spoken to my steward friend I return to my seat to peruse the programme, enjoying a couple of the names in the Yeovil squad, starting with their number four who rejoices under the name of Bevis Mugabi, which is wonderful and beautifully reminds us that the odious president of Zimbabwe is Butthead Mugabe. Two other fine names belong to Brandon Goodship and Ollie Bassett, Bertie’s brother.

The start of the second half witnesses mental flip-flopping from the two teams as Colchester seem to switch from thinking “Yay, we’re winning” to “No, we have something to lose” whilst Yeovil switch from “Oh crap, we’re losing” to “We’re losing, that is an affront to our sporting sensibilities”. Hence Yeovil, or the Glovers as they are known, take the upper hand, gloved presumably and metaphorically they throw a few punches or lay down the gauntlet. It doesn’t last long though and Colchester’s Drey (yeah, like the squirrel nest) Wright is sent through on goal with just the goalie to beat. But Jonathan Maddison’s gloves, hopefully made in Yeovil, are not tested as Drey simply misses the goal.

The excitement subsides a bit as the scoreboard tells us about forthcoming Status Quo and Bon Jovi tribute acts and the man next to me folds his arms across his chest because it’s getting a bit chilly, or perhaps because he doesn’t like tribute acts. I notice that Yeovil are playing up to a West Country stereotype by advertising the name of Thatcher’s cider on their shirts and then the scoreboard tells us that we could “Get close to the action for as little as 10p a day”, which makes me wonder if there is £36.50’s worth of stuff I need or even want to know about Col U in the course of a year. At the edge of pitch an advertising board says “Macron” ;

Col U are still in the play-offs but not too much is happening and on 72 minutes some supporters desperate to cheer something celebrate a goal for Accrington Stanley at Stevenage, another team with a chance of qualifying for a play-off place. But there is a better reason to celebrate four minutes later as the ball is pulled back across goal leaving Tarique Fosu-Henry in sufficient space for a second time to score for a second time.  A lairy looking character runs onto the pitch and is hauled away by stewards.

Everything is going swimmingly for Col U or is it? Word arrives that just before Colchester scored their second goal Carlisle United had taken the lead away at Exeter City, pushing Colchester United down into 8th place, outside the play-off places. A pall of near silence falls over “Layer Road”. It’s now quiet enough to hear an anxious voice shout “tackle him”, although he’d better advised to try and cheer on Exeter City. The dream is fading and the part-time supporters first drift and then flood away,

leaving a row of empty seats in front of me along with a pile of empty sweet wrappers but taking with them the promise of tooth decay, obesity and type two diabetes.

With the final whistle I head post-haste for the bus back to the railway station. Col U played well and deserve their lap of honour in front of their fans, but stuff that I want to get home. My wife has been keeping me updated about her team Portsmouth, who have won the Division Four championship this afternoon and champagne is once again in the fridge just waiting for me to open it for her. Play Up Pompey!

Later that evening I fall asleep on the bed fully clothed.