A surfeit of snow last Saturday week resulted in a rare postponement at Portman Road and now the joy that emanated from the relief of not having to go out on a grey, cold, icy afternoon is re-doubled as we reap the benefit of the inevitable mid-week match under floodlights.
On the basis that yes, it is possible to go to the pub too soon, I play the unaccustomed role of thrusting career man by working until five o’clock, but then walk directly to St Jude’s Tavern along with my accomplice for the first part of the evening, Roly. It feels odd that it’s still light, but that’s the wonder of the Earth’s rotation on its tilted access around the sun for you. In Sir Alf Ramsey Way a white van disgorges its load of transparent, polythene, East Anglian Daily Times ‘goodie-bags’ onto the pavement behind the North

(Sir Bobby Robson) Stand and a few stewards stand about and chat before entering the ground. I wave to a moustachioed man called Michael who is hanging about in a blue Ipswich Town jacket by one of the burger vans on the Portman Road car park.
At St Jude’s Roly and I quickly decide to enjoy a pint on its own before moving onto a pie and a pint. We each choose the Match Day Special (£2.50) and before we have finished our pints Phil the ever present fan who never misses a game walks in carrying a bag of chips. Phil asks me to hold his chips while he asks at the bar if they feel comfortable with him consuming food purchased off the premises; they do and thanks to this grown-up, relaxed and progressive attitude he is able to join us with a half a pint of something about which I don’t know the detail. We talk football but also, in an homage to ‘What’s My Line’, of our respective employment and Phil reveals that he once worked at a music venue where he ‘roadied’ for Iggy Pop. He did the same for other recording artists apparently but having heard him mention Iggy Pop, I wasn’t paying attention after that. I soon return to the bar to arrange pies and pints (£5 for one of each); the last Steak & Kidney pie in the fridge for Roly and Chicken and Mushroom for me. I choose Elgood’s Cambridge for my pint whilst Roly remains faithful to the Match Day Special.
St Jude’s is filling up with bands of middle aged blokes heading for the match, but determined to at least get some enjoyment from the evening by drinking some good beer first. Chips, pies and pints savoured, Phil and Roly then each imbibe a half of Nethergate Priory Mild whilst I enjoy a full pint (£3.20) because I am going home by public transport and can drink as much beer as I like. Phil leaves for the game before Roly and I and before we in turn leave I speak to a cap-wearing, bearded man called Kevin, who I know from our shared experience of Wivenhoe Town. Kevin has come to St Jude’s after reading about it in this blog. Roly and I are leaving earlier than I would wish because he wants a ‘goodie bag’, or at least the packet of crisps it contains.
The walk to the match is as ever brisk and full of anticipation as the glow of the floodlights draws us down Portman Road like moths to a flame. As we pass the end of Great Gipping street I catch a glimpse of an upright lady gliding past on her black, Dutch, Azor bicycle, her dark curls buffeted by the breeze. “Gail!” I call and she stops. It’s my friend and former colleague who I have correctly identified as Gail, riding home from work. She’s late because her train was. I admire her red leather gloves and am impressed that she has negotiated the Portman Road crowds on her splendid black bicycle. We kiss one another on the cheek like the sophisticated Europeans that we are, no Brexit for us, and exchange all too brief words before carrying on our respective ways. Under the far-off gaze of Sir Alf Ramsey’s statue Roly and I part company as he heads for the East of England Co-operative stand to take up his ‘posh’ seat, which is more suited to Waitrose than the Co-op. 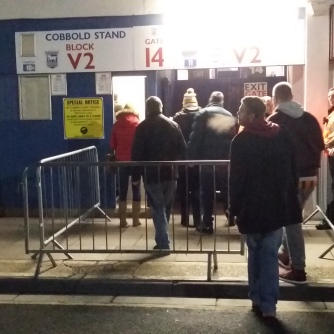 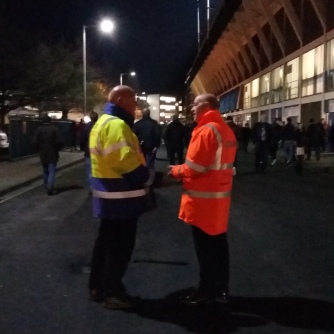 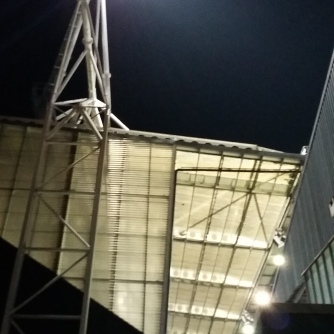 I breathe in the smells of bacon, chips and onions and move on down gently-lit Portman Road to the Sir Alf Ramsey Stand, which is forever Churchmans. It seems the club has not opened all the turnstiles tonight and so I join a queue and remember what it was to go to a ’big match’ in the days of terraces. Inside the ground the strains of ‘My Way’ are reaching their conclusion; played in honour of Sir Bobby Robson whose favourite song it was, but poignantly and probably unknowingly tonight in honour of the man who wrote it. Cabaret singer Claude Francois or ‘Clo-Clo’ as he was popularly known in his native France, died forty years ago this weekend just gone. A nasty little man by many accounts, but beloved by thousands of middle-aged French women, he died in mysterious circumstances when he stood up in a hotel bath to correct a flickering light bulb. In France the fortieth anniversary of his death is front page news.
The game begins with tonight’s opponents Hull City, in their customary tiger suits of amber and black striped shirts with black shorts kicking towards the Sir Bobby Robson (North) Stand, but Ipswich get first go with the ball and start the game quite well. Within the first ten minutes Town win a corner and a header from Jordan Spence strikes a post. But Hull respond with shots at goal of their own and Bartosz Bialkowski makes a couple of neat saves. A drum is drummed in the North Stand and a chant chanted. Hull supporters make equivalent sounds. The man in the aged couple behind me says “That’s three shots their had”. “Yes” says his partner. “We never have one do we”. His partner doesn’t respond, hopefully she remembers the header against the post, although strictly speaking I suppose that wasn’t a shot.
I dare to think things aren’t that bad, but then a free-kick is passed to a Norwegian man called Markus Henriksen, who like the villain in some Scandi-noir stabs Town fans’ hearts with a right footed shot past big Bart’. I look to the bench expecting to see Mick McCarthy holding his head like the isolated figure in Edvard Munch’s The Scream. I’d been hoping for a third consecutive goalless draw, and now this. I rally and chant on my own whilst every other Town fan recedes into their customary introspective gloom. Twenty-three minutes have passed and the visiting supporters, of whom there are 290, advise the home supporters that “Your support is fucking shit” as the familiar Welsh hymn goes. They are of course right and I imagine Mick McCarthy would respect their bluntness; no pussyfooting about asking if this is a library. But they know all about libraries in Hull, or Philip Larkin did.
Freddie Sears and Grant Ward dash down the right and cross the ball to an invisible force, which fails to score. Meanwhile down the left not so much happens; Town’s nicely named left-back Jonas Knudsen may be in the Danish international squad, but I can’t be optimistic about a player nicknamed ‘Mad Dog’; less marauding Viking and more appreciation of Soren Kierkegaard and hygge is what’s needed.
Forty minutes pass; referee Mr Jeremy Simpson, the least amusing of Matt Groening’s characters, fails to spot the ball ricochet off a Hull player for a corner to Ipswich and instead play heads north at the feet of the Tigers and a low cross is turned into Ipswich goal net by a young lad by the name of Harry Wilson. Wilson is a player crying out to be managed by the late, great Brian Clough who would doubtless have referred to him as Harold Wilson. The 0-2 score line is enough for some in the North Stand to brush off their copies of The Beachboys’ Pet Sounds and sing along to Track 7 letting Mick McCarthy know that his “…football is shit”. Half-time comes and the expected booing ensues.
In common with the theme for the whole evening, there is no entertainment at half-time. I flick through the glossy but dull programme. Scanning club captain Luke Chamber’s column I see a headline “There is not enough communication and people approaching you to discuss your options. There is no help with planning going forward”. That’s an unusually frank and honest assessment I think, imagining he’s talking about playing for Town; it turns out however that he’s writing about the lack of help and advice the Professional Footballers Association gives to players towards the ends of their careers. Or so he says. 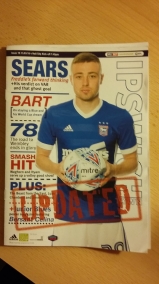 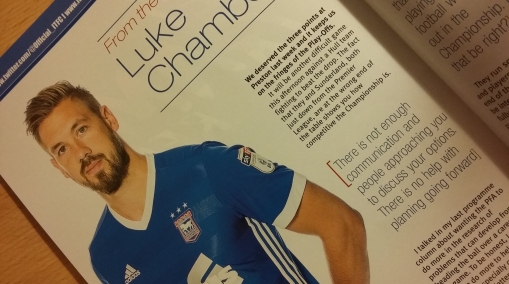 The game begins again and within two minutes Hull City are winning 3-0 as someone called Jarrod Bowen kicks the ball between Bialkowski and his near post. Once again the North Stand let Mick McCarthy know about his stinky football, which seems a bit harsh because I doubt he told the players to just let anyone in a stripey shirt run past them and score, which is what they actually did. But at least the Hull supporters are happy and they ask if they can play us every week; which is nice.
The game is effectively over now and Hull are happy to allow Ipswich to endlessly pass the ball about between themselves, as long as they don’t kick it at their goal, and that is largely what happens. As the ball nears the Hull penalty area someone shouts “Shoot”. The old boy behind me responds “They don’t know the meanin’ of the word” whilst his partner reflects “I reckon that’s all they do up Humber Doucy Lane, keep passing the ball to one another”. Some spectators make their own entertainment, cheering sarcastically with each pass but largely the atmosphere is morose. The chill night air further deadens all feeling and for a few moments I lose myself in the heady smell of the damp turf. Two of the Hull players sport pony tails, which is a bit dated, another is balding and with his bushy beard looks like a member of the Russian royal family or King George V. The Buddleia still grows in the roof of the stand. The attendance is announced as a palindromic 13,031. Just after a quarter past nine Freddie Sears manages a shot, which isn’t very far wide of the goal and draws some applause. When Hull’s Will Keane runs largely unopposed through the defence and forces Bialkowski into a save a ripple of unrest passes through the East of England Co-op stand like a shiver. The old folks behind me leave and there are still eight minutes left of normal time; he says something about watching paint dry.
The final minutes have a slightly new soundtrack as the North Stand sing “Get out of our club, Get out of club, Mick McCarthy, Get out of our club” naturally to that tune for all occasions, Sloop John B. I don’t fully understand why, but in my head I’m singing “If you want a lot of chocolate on your biscuit join our Club”.
Jeremy Simpson is a kind man, irrespective of his poor eyesight and only three minutes of added time are joined on to the usual ninety; once these have expired I am quick to turn and leave, closing my ears to the boos and the wailing and gnashing of teeth. It’s only a game after all and I’m pleased for Hull; any city that can boast an association with William Wilberforce, Phillip Larkin and Mick Ronson deserves the odd 3-0 away win.