Nimes in the Occitanie region of southern France is a wonderful and ancient city with a plethora of Roman remains including a virtually complete amphitheatre and temple (La Maison Carre), which frankly make most of the Roman remains in England look like random heaps of rubble and barely worth bothering about.
History notwithstanding, tonight we are in Nimes for the match between Olympique Nimes and AJ Auxerre, two football clubs that have in the past both played at the top level of French football, Auxerre having even won the Ligue 1 title. Today however, both are in the under-hyped Ligue 2, the second of France’s two professional leagues. Despite France’s reputation for haute cuisine, Ligue 2 is sponsored by Domino’s Pizza.
We bought our tickets

at the Stade des Costières stadium earlier in the day to avoid any queue, although we did have to wait a short while because the sign in the window of the guichet read ‘back in five minutes’. Tickets for the main stand cost 14 euros, whilst those for the identical stand opposite are 9 euros and a ticket behind the goal costs 4 euros. We buy 9 euro tickets in the Tribune Sud (South stand). There are acres of free car parking all around the Stade des Costières and arriving a little more than an hour before kick-off it’s easy to park up near the exit for a quick getaway after the match. Nevertheless, there are plenty of people here already, buying tickets, standing about, socialising and heading to bars for a pre-match aperitif. 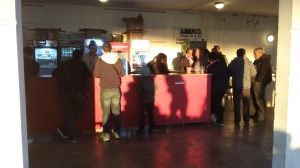 The stadium itself isn’t open yet, but we file in a minute or two after seven o’clock and the now standard frisking and bag inspection. The Stade des Costières was opened in 1990 and designed by Vittorio Gregotti and Marc Chausse; Gregotti was also architect of the Stadio Communale Luigi Ferraris in Genoa, one of the venues for the 1990 World Cup. Although the stadium does now look a little run down in places, it is nevertheless a fine building and a great place to watch football. There are two broad sweeps of grey seating on either side with roofs suspended from exposed steelwork.

The ends are open and each corner of the ground is a white concrete block containing the accesses, buvettes and toilets and on the main-stand side, club offices. Inside these blocks the ramps and staircases read more like an art gallery than a football stadium and from the ramps there are views across the seats through sculpted openings. The stands behind the goals with their bench seats and classical-style structures at the back, which whilst looking a bit naff somehow also look alright in this context, make me think of the arène (amphitheatre) in the centre of town; I hear a far of voice of a hawker “ Otter lips, Badger spleen!”.
The sun is setting spectacularly behind the Tribune Ouest casting soft shadows on the white concrete of the Stade, the clouds that have made it a grey day are dispersing, the floodlights are on and the teams are warming up. There is a wonderful air of expectancy and relaxed sociability as the Stade fills up and people throng by the pitch and on the broad concourse behind the seats. Some men drink beer; some stuff their faces with baguettes from the buvette, whilst other have brought food from home, carefully wrapped in tin foil. Bags of a locally produced brand of ‘artisan’ potato crisp are much in evidence. 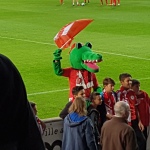 Nimes’ crocodile mascot does his rounds as people, mostly children, pose for selfies with him; I am very tempted but my wife gives me a look. With the teams’ and Ligue 2 banners on the pitch a man with a radio mike gees up the crowd as the teams enter from the corner of the ground. There are ultras both behind the goal and beside the pitch, waving flags, standing clapping and jumping about. The chant is “Allez-Nimois, Allez-Nimois”. I join in. Why the hell isn’t it like this at Ipswich? The crowd is less than half the size of that at Portman Road (6,771 tonight) but three, four, five, a hundred times more involved. There are just a handful of stewards in the stand; I don’t feel like I am here to be policed, but to enjoy the match.

The game begins; Nimes kicking off towards the Tribune Est in their red shirts with white shorts and red socks, Auxerre in white shirts with blue shorts and white socks. After only eight minutes a poor punch by the Nimes ‘keeper Marillat requires a second punch but the effort is too much and he falls to the ground clutching his knee. Both the physio and club doctor attend to him and Marillat carries on, but for less than fifteen minutes before he has to be substituted. Nimes lose a second player to injury in Valdivia who had previously been fouled by Auxerre’s Phillipoteaux, who is the first player to be cautioned by referee Monsieur Aurelien Petit. How witty of the LFP to send a referee to Nimes who shares his first name with a Roman Emperor. Nimes are attacking more than Auxerre or in greater numbers, but are creating no more or better chances. It doesn’t look much like anyone will score.
In the stand a large man in a white polo shirt, which barely conceals the presence of flabby breasts, is exhorting his fellow supporters with the use of a megaphone. At first he is ignored but he doesn’t give up and begins to sing softly, but then with increasing strength before he signals to a drummer besides him who breaks out a rhythm and people to start to jump and clap and sing and have a helluva of a time, before going quiet and the whole performance is repeated. It’s like a flash-mob version of Bjork’s “It’s oh so quiet” in which the main lyrics are “Allez-Nimois”. It’s a lot of fun.
Four minutes of added time for injuries precede half-time in which there is a shoot-out between two teams of what are probably under-tens. The goalkeepers are somewhat dwarfed by the goals and the shoot-out takes a long time because the boys have to run from the half way line; there is one girl in the two teams and her goal receives the biggest cheer. How might radical feminists view that? As positive discrimination or as patronising? Discuss. Meanwhile an advertisement hoarding encourages spectators to travel to the match on the “Trambus”, which is really just an articulated bus with fared in wheels and a dedicated bus lane, but it’s good to see the football club and local authority combining to promote public transport in spite of all the free parking spaces.
Within thirty seconds of the re-start Nimes have a corner after a good dribble, but poor shot from Thioub. From the corner the ball is partly cleared and Auxerre’s wonderfully named 36 year old Guadeloupian, Mickael Tacalfred tries to clear the ball further but collides with Nimes’ Bozok and Monsieur Aurelien Petit awards a penalty and instantly brandishes his red card in the direction of Tacalfred for dangerous play (a high boot or “coup de pied haut”). Both the award of a penalty and the sending off seem somewhat harsh. The game is delayed as the matter is discussed at length by the Auxerrois but eventually Savannier puts Nimes ahead. “B-u-u-u-u-u-t! ” shouts the announcer through the public address system before calling out the goal-scorer’s first name to which the crowd give his surname in response.
More drama ensues as Auxerre’s Arcus collides with the replacement Nimes ‘keeper Sourzac. Arcus had already been booked in the first half so quickly leaves the scene of the incident as Sourzac stays down clutching his chest, but is of course okay really and later he easily saves Auxerre’s only shot on target.
Sixty-three minutes have passed and now there is a free-kick to Nimes and a booking for Auxerre’s Yattara who had been whining all game. Nimes’ Moroccan forward Alioui does a little shuffle, as if to take a rugby-style kick, before running up and arrowing a shot over the defensive wall and into the top left hand corner of the Auxerre goal. A brilliant shot which predictably is met with a great deal of noise and excitement, all of it justified. At the front of the stand, fans pogo whilst chanting an extract from Bizet’s Carmen.
Nimes are exultant, Auxerre vanquished but it isn’t over yet. Alioui keels over to earn another free kick to Nimes in roughly the same place as he took the first. Whilst he repeats the earlier performance with a missile of a shot that Kim Jong-un might covet, Auxerre’s ‘keeper Boucher dives to save the shot, only for the Nimes captain Briançon to score from the rebound. Joy abounds amongst les Nimois.
The final fifteen minutes sees the best football of the match as both teams relax, knowing the inevitable result and not wanting to add to the tally of yellow and red cards. Nimes ultimately deserve their win, but have had a big helping hand from the referee Monsieur Aurelien Petit along the way. Nevertheless, overall it’s been a blast; I have had a lot of fun on a fine evening, in a beautiful stadium in a fine city with excellent supporters, even if the France Football correspondent later only marks the match as 8 out of 20. Allez Nimois! 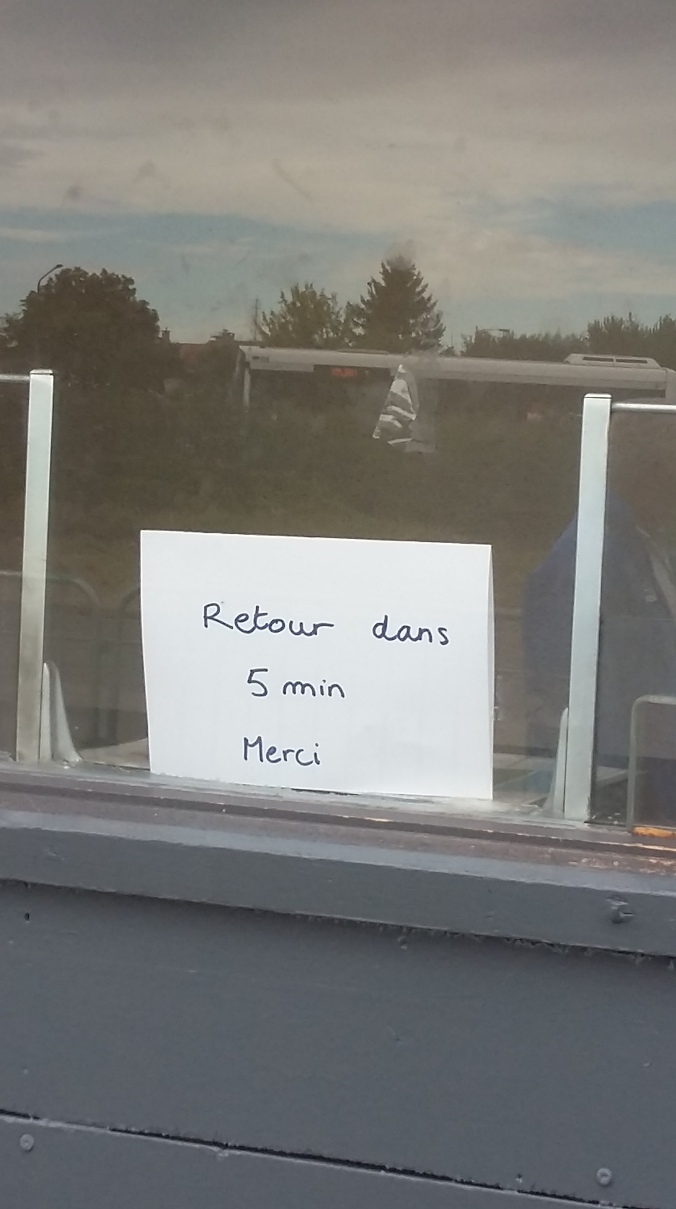