The roadtrip from Marseillan on the coast to Béziers takes about thirty five minutes; it’s Friday evening and the roads are busy with people going home from work and others heading for the coast for le weekend. Generally however, we seem to be travelling in the right direction because it’s not quite so busy; it’s just a shame more people aren’t on their way to tonight’s match in the Ligue National at the Stade de Sauclieres in Béziers.  Then again, it is only half-past six and the game won’t start until eight.

The stadium is on the edge of the ancient town, beyond the railway tracks and the River Orb; our final approach is down rough riverside roads lined with massive plane trees whose boughs arch over it both beautifully and a little threateningly. There is a large concrete framed red brick factory for a valve manufacturer (Cameron’s) from which a railway runs out across the road and over the river via a metal lifting bridge squeezed between the trees. Factories in rural settings are another of so many things the French do well.

Having negotiated a roundabout decorated with a large steel valve we see the stadium looming up on our left, although it doesn’t look so much like a stadium as a castle wall, 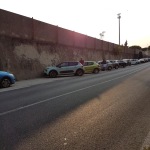 minus crenellations. I swing the car round to park at an angle between the road and the high grey wall. We walk in the road past the ends of other parked cars to the main entrance to the stadium. There’s no one much about, just a few Dunkerque fans waiting around outside and they are outnumbered by the security people; hefty blokes in navy blue uniforms and one blonde and not at all hefty woman. The guichets (ticket booths), which look like arrows might be fired from them, are not open yet, but soon one does open and once the bearded man inside has finished his conversation with someone who remains invisible to us from the outside, I hand over €20 for two tickets, children are admitted free, but we haven’t brought any of those with us.

Before entering the ground we are frisked by security. A tall stocky bloke in his late twenties asks me to spread my arms out. It’s been a warm day and it’s a warm evening and I can smell his stale deodorant as he pats down my t-shirt and shorts and then bizarrely my bare legs. I laugh, but not because it tickles. What did he suspect I would be concealing amongst the hairs on my legs? Perhaps he was checking for flares.

We walk on into the stadium through the car park, behind another high grey stone wall. A sign warns not to park under the trees when the wind is strong. We reach the corner of the stadium where there are two buvettes, a large one serving drinks and a gazebo serving chips and baguettes. Payment is by plastic orange jetons (tokens) which cost a euro each. I buy two jetons and exchange them for two bottles of water. There is an area reserved for ‘VIP’s’ behind the main stand which is fenced off from the hoi polloi. The main stand 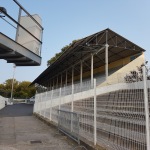 is the only stand, a tall steel and concrete structure with a steep pitched roof. There are eighteen stanchions (I counted them) evenly spaced along the stand supporting a network of struts that in turn support the roof. The other three sides of the ground consist of wide sweeping terraces 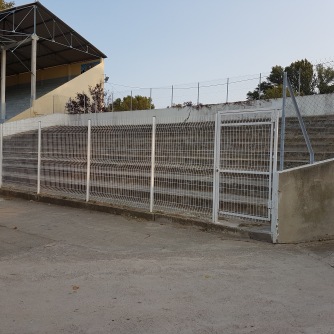 closed off from use behind chain-link and Heras fencing.  It’s nevertheless an impressive arena, evocative of a bygone era, but still acceptable (with the exception of the toilets) in the context of a club that draws crowds of no more than a couple of thousand. It’s a pity at least some of the terrace behind the goal is not open however.

The stand fills up as kick-off approaches and we play ‘Spot the Wag’ as a number of slender women with perfect hair and makeup totter up the stands in tight trousers. Between her dad and her mum a little girl clutches a Barbie doll, still in its box.   The banners of the two clubs and the Ligue National are trotted out onto the pitch by six young lads

who turn and face the stand and wait a good five minutes for the teams to appear. Meanwhile the pitch sprinklers briefly come on, first in one half, then in the other, making the boys squirm and laugh as they get wet. The public address system stutters into life as the teams are announced in the style of a French Freddie ‘Parrot Face’ Davies. The small band of ultras, the Kop Biterrois

, whose logo seems to be a monkey in a hat and sunglasses, are at the end of the stand and one of them beats a drum. After a minute’s silence the referee Monsieur Benjamin Lepaysant begins the match and AS Béziers kick -off towards the Cameron’s factory end of the ground. Straight from the kick- off we are treated to a cameo of how the match will pan out as Béziers indelicately boot the ball toward the Dunkerque goal, where the visiting full-back heads it weakly back to his goalkeeper, but it spins out comically for a corner to Béziers.

The Dunkerque number six, who sports Zlatan Ibrahimovic-style hair, looks quite good as he plays a couple of difficult but accurate passes and then makes a surging run forward from the back. After that however, he seems to be singled out by Béziers as a threat and is left in a heap a couple of times before he begins to feature less. Béziers’ wide players make runs forward and cross the ball to no one in particular and a Dunkerque forward shoots wildly over the crossbar and the game settles down to something less than mediocrity. At times the gaggle of ten to twelve year-olds kicking a ball about on the cinder track in front of the stand play no less entertainingly.

My wife says she sees a bat fly under the eaves of the stand, I say I think I see one too, but she claims mine was just a dragonfly or large moth. I watch the coaches of the two teams; the Dunkerque coach wears a t-shirt and jeans and has glasses and floppy hair, he looks and moves a bit like Jurgen Klopp, bouncing about the technical area, folding and unfolding his arms. The Béziers coach squats at the corner of his technical area and rises slowly, he is clearly suffering from some sort of an injury, perhaps to his hip, and he walks stiffly; I think I catch him looking enviously at his lithe opposite number.

The first yellow card of the game is shown after thirty-two minutes to Béziers’ number seventeen who has left the Dunkerque number six on the grass nursing his jaw. Nine minutes later some of the crowd, other than just the ultras raise some enthusiasm as Béziers’ win a free-kick and rythmic clapping to a 1-2, 1-2-3, 1-2-3-4 pattern, followed by a shout of “Béziers!” is heard. It’s a false alarm however, as the free kick is easily caught by the goalkeeper’s grandmother.

The clock at the end of the ground shows just forty-four minutes played, but half-time is called as Monsieur Lepaysant says enough is enough. A human tide flows to the buvette and the toilets, which my wife joins only to return after the match restarts with a terrible memory of perhaps the most unsanitary khazi

she has ever had the misfortune to visit. Worse than the North Stand toilets at Fratton Park back in the early 1970’s apparently, and no wash basin. A French girl refused to enter one cubicle. I hear the half-time scores from the other Ligue National matches over the echoing tannoy and I might be wrong, but it sounds like they are all nil-nil. I like to think they are.

Béziers begin the new half with a flourish as their number three folds in a deep curving cross; their number twenty one reaches it but cannot direct the ball at the goal. The mediocrity returns and my attention is won by a surreal sight at the top of the long, empty terrace opposite the main stand,

where a man is sitting at a desk.  I can only assume that this is the location for the Délègue Principal for this game, Monsieur Roger Lefebvre;

nevertheless, I cannot help imagining my vision zooming in on him whereupon he looks up and says “…and now for something completely different”.

I think some of the problem with this match is the team kits; Béziers in their weird all aquamarine coloured kit look like the away side and Dunkerque in red and white stripes with red shorts and socks look like a plausible home team. Why that should be a problem I don’t really know, but it just doesn’t seem right. Another Béziers player is booked (number 19) after sixty two minutes, but two minutes after that they should score as a fine move, which seems to unfold in slow motion before our very eyes ends, as we knew it would, with the Béziers number nine heading over the cross bar as he seemingly attempts to not let the ball smack his forehead too hard. With twenty-three minutes remaining, Béziers’ number twenty-five performs a very smart turn indeed, before trickling the weakest shot imaginable a metre wide of the goal. Ten minutes later he surpasses this as he receives a low cross on the edge of the penalty area, controls, deftly makes a yard of space, and then completely misses the ball as he goes to shoot. Continuing this rich vein of form he then ends a rare decent flowing move with what looks like an aimless swing at the ball disguised as a terrible lofted pass, before hobbling away to conceal his embarrassment. But it’s been that kind of a match; the players have not necessarily been particularily bad, it’s just that the ball won’t do what they want it to.

Just before the three minutes of added-on time is actually added on, Béziers’ number ten heads the ball directly into the arms of the Dunkerque goalkeeper and then in added time Dunkerque twice cause confusion close to the Béziers’ goal, but are as confused about where the ball is as Béziers.

Sadly this game hasn’t turned out to be a particularily good advertisement for the third tier of French football or its toilets. Nevertheless, it has been a beautiful warm evening in a lovely evocative setting and I wouldn’t have missed it for much.

NEWS! After the game I emailed AS Beziers to ask if they  would clean the toilets in time for the next match. They replied to say that as the stadium belonged to the town of Beziers it was the local authorities responsibility; but they had in turn written to La Ville de Beziers asking them to follow up the matter. I later received an email from La Ville de Beziers letting me know they would be cleaning the toilets.