I had not originally intended to go to this match; I had thought that the game between Colchester United and Football League ‘new boys’ Forest Green Rovers was a far more attractive prospect. Looking ahead at the fixtures I figured Ipswich would probably be beaten if not embarrassed by Fulham and Forest Green Rovers, as their name implies are rather interesting. FGR are based in the smallest settlement to ever have a team in the Football League (Nailsworth, Gloucestershire, population 5,800 in 2011), the chairman is a former new-age traveller turned sustainable energy entrepreneur and the pies at their home ground are intentionally meat-free. But no one would take my Ipswich ticket off my hands and I am still suffering from early season inertia, so I have no ticket for Colchester and I end up on the train to Ipswich once again.
The train is on time and a well-built woman with a brood of children of various ages rudely bustles on whilst other people try to get off. On the train an ageing couple sit silently and then change seats in Colchester without speaking; as if they were communicating by telepathy. A woman in her seventies with blonde hair (yeah, right) clutches a plastic drink bottle to her mouth like a small child. It’s a warm, still, almost sultry late August afternoon and I can feel my T-shirt sticking to me slightly as I lean back on the dark grey moquette of the train seat.
The train hurtles along the tracks at a fair tilt and arriving in Ipswich on time I head for the St Jude’s Tavern as usual, responding to the rare promise of good draught beer. Ipswich Town Football Club tells us that they serve real ale but sadly it always seems to be Greene King. Portman Road is still fairly quiet, but a few Fulham fans are here already waiting for the turnstiles to open; the stall selling old programmes is almost set-up, the burger vendors have their griddles heated and a couple of early diners sit on a low rail and fold foamy bread rolls into their mouths with ketchup tainted fingers.

At St Jude’s Tavern I sit alone today and so have bought a copy of the programme (£3.00) to read. I drink a pint of Gannet Mild (£3.40) and twenty minutes later a pint of Nethergate Five Rifles (£3.00); it’s still only twenty five past two so I throw caution to the wind and down a third pint; Lacon’s Legacy (£3.20). The programme is not very interesting, as ever, full of the usual platitudes and cliché. There is an article about the young player Tristan Nydam, which labours under the weird and meaningless title of “Tris and Shout”.

It takes me a few seconds to twig that this is an attempt at a pun based on the song title “Twist and Shout”. Within seconds I come up with my own vastly superior choice of pun title: “Tristan’s Handy”, which actually means something, clearly relates to the player’s name and raises the tone by referencing a work of Irish literature, with which Mick McCarthy as former manager of the Eire national team will surely be familiar (that’s Tristram Shandy by Laurence Sterne…just in case).
Leaving St Jude’s I make my way down Portman Road, following three gentlemen

who have the appearance of a Last of the Summer Wine tribute act. Inside the ground the public address system is playing Bon Jovi, I head for the toilet to drain my bladder, but there is no escape from the dreadful, anthemic, 1980’s hair-rock, which is possibly being fed in through the cistern. Now in my seat I feel doubly relieved as the strains of Bon Jovi recede, the teams enter the field to a particularly bloated rendition of ‘My Way’ (Bobby Robson’s favourite song apparently) and it’s time for the game to begin; it is two minutes past three, we’re late.
Fulham take control of the game with indecent haste, barely allowing Ipswich a kick-of the ball. The home crowd settle down into their accustomed quietude and predictably the Fulham fans ask through the medium of song “Is this a library”? In places it resembles a chapel of rest as the demographic for Town fans becomes increasingly top heavy with those who remember the good old days. In lieu of the parachute payments enjoyed by other clubs who make it into the Premier League for a season, ITFC could probably make up the shortfall by offering their own funeral service.
There is little to excite the home fans and a when the female linesman (lineswoman?) appears to miss the ball going out, she provokes ire, setting back the cause of feminism by a hundred years. A shot from a Fulham player hits a post and I dare to think that may be Fulham will continue to completely dominate but will never score. It is twenty five past three and I don’t think Ipswich have had the ball in the Fulham penalty area yet.

The Fulham goalkeeper wanders about to keep awake and in the manner of a grizzly bear, rubs his back on the pole that secures the goal net; he is wearing a vivid all red kit the colour of a nationalised, 1970’s Eastern Counties bus.
Half past three goes by and Ipswich have their first shot in the general, but not exact direction of the Fulham goal. Five or so minutes later however, a deep cross from the left is met by the head belonging to Fulham’s Neeskins Kabano and Fulham take the lead. I am disappointed, Ipswich have won their first four league games, I had hoped for better, but I cannot deny being impressed by a bloke with the name Neeskins Kabano. I cannot begrudge a goal scored by a man whose name brings together the very best of Dutch football from the 1970’s and a spicy, Polish pork sausage. All power to his elbow and other joints and limbs.
Puffed up with the sense of self-love that football crowds seem to develop when their team is winning, the Fulham fans start to chant “Super Fulham, Super Fulham FC” which

is a bit confusing as it sounds as if there are two teams, ordinary common or garden Fulham FC and then another team called Super Fulham FC. Unimpressed by such boastfulnesss, Ipswich manage their first shot on target. Then, for a second time in the space of a few minutes the Fulham physio is called on to attend to their evidently rather needy number 10 after he blocks a shot Ipswich’s from Martyn Wagstaff (Waggy).
Half-time. I wander about beneath the stand eating a Traidcraft chewy cereal bar. I look up at a floodlight above the stand, I look out into Portman Road through the gates guarded by men in hi-vis; long gone are the more generous, less uptight days of getting in free at half-time. I look towards the players’ tunnel and a point beyond which a sign tells me I am not permitted. The sniffer dog and his handler walk in from Portman Road; the dog has perhaps had a recreational break involving local lamp posts. I see a girl who looks a bit like Adrian Rabiot of Paris St Germain, I decide it’s her nose that’s the similarity but he’s better looking.
The second half releases me from my aimlessness and I return to my seat. The game is soon lost however as Ipswich’s Polish goalkeeper Bartosz Bialkowski, and therefore the player most likely to be familiar with kabanos, makes a brilliant one-handed save, only for some other bloke in a white shirt and black shorts to score from the rebound. Bugger. Fulham are streets ahead of Ipswich, as they were when they played here last season, but I shall put this result down to the law of averages; Ipswich were unbeaten and Fulham had yet to win so it was bound to happen. There is little enjoyment to be had from now on knowing the inevitable fate of my team. The first defeat of the season is always hard to take because I always harbour the hope that one day they will go the whole season without losing. Arsenal have done it; Preston North End have done it; The New Saints of Oswestry Town and Llansantffraid have done it so why not Ipswich Town?
I enjoy an advertisement hoarding for Red7Marine the “The marine partner of choice”, even though I would probably choose Aqua Marina from Stingray and I derive some amusement from the reaction of Fulham’s number 9 who, after colliding with one of the safety gates as he slid off the pitch, seems to complain to the referee about its existence as if expecting that the edge of the pitch should stretch off into infinity rather than there being stands around it. The attendance of 16,844 is announced, with 1,236 being with Fulham. I muse on the apparent baldness of David McGoldrick and whether, if the comb-over was still socially acceptable, he would as a professional footballer follow the lead of Bobby Charlton. Fulham bring on their substitute striker Aboubakar Kamara who I saw score for SC Amiens last season at the marvellous and yet dilapidated Stade de la Licorne, 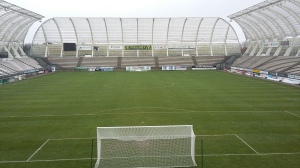 when Amiens played Gazelec Ajaccio in French Ligue 2. Happily Aboubakar doesn’t score today and in fact he doesn’t look very good.
The final whistle is a relief. On balance 0-2 is quite a good score from Ipswich’s point of view. A bloke a few seats along from me reflects on a couple hours of his life having past that he won’t get back. Well we can all say that, even the Fulham fans and players. I learn that Colchester United beat Forest Green Rovers 5-1 and my afternoon is complete.