The football season starts way too early, but rumour has it that every cloud has a silver lining and indeed in my admittedly narrow and miserably limited experience there is much joy to be found in a trip out on a sunny summer’s afternoon to watch a non-league football match. Today is such a day and so I set out for Marks Tey station to catch the knackered bus on rails that serves as the train to Sudbury. It is gloriously warm and a gentle, buffeting breeze ruffles my hair as if to say “Have a good time, you young scamp”. Flat-bottomed cumulus recede into the far distance over droopy-eared fields of golden

cereal; leafy boughs sway softly and the wind through the trees seems to whisper “Here we go, here we go, here we go.”
Clutching my rail tickets (Marks Tey to Sudbury and back £4.05 with a Gold Card) I board the train. The service to Sudbury is hourly leaving at a minute past the hour; it’s about five to one. I choose a seat by a window. As the train departs the straining diesel roars frantically but eventually settles into a measured throb as cruising speed is reached and we trundle along between sun-dappled embankments and under red-brick bridges that carry nothing more than farm tractors over the single-track line. The train stops at Wakes Colne for the East Anglian Railway Museum

(recommended) and at Bures which has a country bus-shelter

(or is it a garden shed? ) as a station building. After twenty minutes of rural rambling the train arrives in Sudbury.
From the station there is a choice of routes to AFC Sudbury’s home, either through the medieval streets of the town with its half-timbered and handsome Georgian buildings or along the track-bed over the old railway line, 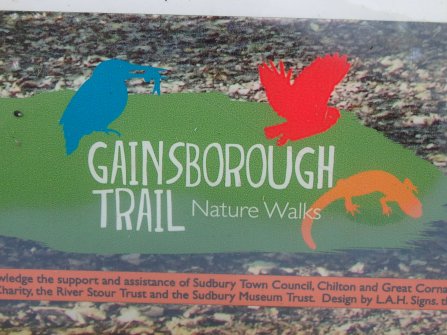 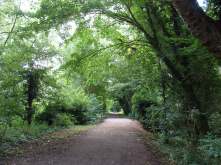 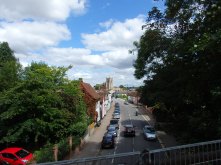 which used to lead onto Long Melford and Bury St Edmunds before it was chopped by ‘that c*nt Dr Beeching’, which was perhaps the original working title of the Croft and Perry BBC tv sitcom “Oh Dr Beeching!”. I take the track-bed or Gainsborough Trail as it is predictably called by the District Council keen to promote the associations with the portrait and landscape painter Thomas Gainsborough born in the town in 1727.

The trail is a part of the South Suffolk cycle route and is popular with ramblers and dog walkers and just with people walking about in Sudbury. I pass a tattooed man with two Staffordshire Bull terriers, “Alright mate“ he says as if he knows me. ”Yep, alright mate” I reply, as if I know him. A gaggle of children and their blonde mother follow behind.

The path is lined with tall trees and crosses over gulleys and streams that flow into the River Stour glimpses of which are seen through the trees. On water meadows brown cows graze and on the river swans and ducks paddle idly by. I feel like I’m in a poem by John Betjeman.
The walk along the trail takes fifteen minutes if you don’t dawdle and then it’s necessary to leave the path, stepping down the embankment onto Kings Marsh.

The Marsh is a bit soggy in places today, probably because it’s a marsh and also due to the very heavy rain in mid-week; I get a soggy foot, but heck I’m wearing sandals so it’s pleasantly cooling

for my dusty feet; more importantly I don’t step in any cowpats. Off the marsh I turn right onto the lane that takes me to Kings Marsh Stadium or the Wardale Williams stadium as the local opticians of that name have paid for it to be called; a large sign nailed to a tree that suggests I might stumble across some tortoises or sloths.

Outside the ground there are community facilities and I am tempted to brush up on my Lindy Hop or learn a few sweet new moves at the dance class, but I head on to the turnstiles. It costs £10 to get in which is £4 more than it costs on average to watch football at just one step below in the league ladder (Eastern Counties Premier League) although the higher up teams do have to travel further so the overheads increase and it’s likely the players are paid more too, but it’s nevertheless a 67% leap in price. I buy a programme for £2 and head to the bar and club shop, which is a cabinet in the corner. At the bar I have a pint of Nethergate Suffolk County bitter (£3.30) and I wonder why can’t all football clubs, particularly the bigger ones like Ipswich Town and Colchester United offer a decent hand-pulled beer produced by a local brewer that isn’t the brewing monster that is Greene King.

I stand by the pitch with my beer and the souvenir I purchased from the club shop (£1) and bask in the afternoon sun as the players go through their warm-up routines. I pause and reflect on what a beautiful day it is and upon the glorious arboreal back drop to this stadium and beautifully bucolic nature of my journey here. I am jolted from my reverie as I am joined by a friend and colleague who has walked from nearby Borley, he buys me another pint of Suffolk County bitter and has an interesting conversation with the barman:
-“ Two pints of Suffolk County please”
“One?”
-“No, two please”. The pints are drawn and the barman stands them on the bar before asking
“Three pints?” The smart-arse answer might have been, “No, two Babychams a Mackeson and a Noilly Prat”.
We stand just outside the clubhouse and bar leaning on a metal barrier, supping our beers from plastic cups. A succession of pot-bellied, middle aged blokes walk back and forth in front of us between the food stand and the seats. The teams come on to the field and after a minute’s applause for a young player killed in a car accident during the week, the game begins.
This is the first match of the season for Sudbury and their visitors Canvey Island in the Bostik North Division, into which both clubs were relegated at the end of last season; presumably both clubs will be hoping they don’t stick around in this league for long. Sudbury wear their customary yellow shirts and blue shorts whilst Canvey rather 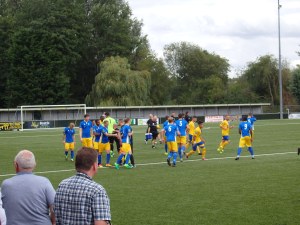 inconveniently I thought wear blue shirts and yellow shorts. It doesn’t make for an ideal composition visually but surprisingly the kits don’t really clash although I think Thomas Gainsborough would have had something to say about it.
The ball pings back and forth as players take it in turns to kick it and it’s fairly entertaining, although not of particularly high quality and effort and running mostly take precedence over skill. Canvey are spending more time in the Sudbury half of the artificial pitch from which clouds of little black rubber balls fly or are scuffed when the ball is kicked; there is a faint rubbery smell at times which doesn’t compare well to the smell of turf, but otherwise you wouldn’t really notice that the pitch wasn’t ‘real’. A small knot of Canvey fans are gathered behind the goal into which their team is kicking and they sing a couple of tunes more usually heard at French Ligue 1 and 2 matches, although sadly not in French. One fan waves a large blue and yellow flag. Sudbury have no ‘ultras’ of their own. 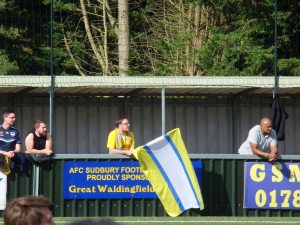 Having hit the cross bar twice in quick succession and survived Sudbury hitting a post, Isle de Canvey take the lead with a fine volley into the top corner of the goal from their centre-forward George Sykes, who for at least two spectators in the ground immediately conjures up thoughts of Bill, Eric and Hatti Jacques. Canvey are still leading when half-time arrives and with the last shrill note of referee Mr George Laflin’s whistle still ringing in my ears I turn to make the short journey to the bar for another two pints of the very fine Nethergate Suffolk County bitter. Before all the players have left the pitch I have returned to our vantage point with two foaming plastic cups of beer.
With Sudbury’s Thomas Gainsborough connection, I am surprised looking around the ground that there is a food kiosk on the far side of the ground with name Turner painted upon it, and my friend and I muse upon what food by the artist JMW Turner would look like; we decide upon smears of tomato sauce and mushy peas resembling a blurry sailing ship. Our eyes are also attracted to an advert board for ‘Paul Pleasants, Entertainer’

with its wacky rainbow background. What an apposite name for a family entertainer Paul Pleasants is; alliterative too, if it’s real that is and his actual name isn’t something like Barry Bastard.
Feeling enriched by the variety of human experience we are ready for the second half, one in which Sudbury take the upper hand and eventually equalise as a free-kick evades a defensive wall of Canvey Islanders and squeezes beyond the despairing reach of their goalkeeper. The Sudbury players celebrate with abandon. A Canvey fan bawls something incomprehensible which sounds like he’s trying to sell newspapers.
The sun beats down, we drain our beer, we laugh, we cheer and then the final whistle is blown by George Laflin for whom, as referee, we have nothing but respect. It has been a fabulous afternoon of sunshine, warmth, trees, puffy white clouds, pastoral landscapes, beer and football. My only regret is that Thomas Gainsborough could not have been here to capture its glory in oils and have a pint of Suffolk County bitter with us. Summer football at AFC Sudbury is to be recommended, one day I will may be see if football at AFC Sudbury on a dank December day is as much fun.