It’s the first day of August and with indecent haste the football season has started again. But in the Thurlow Nunn Eastern Counties League Premier Division it needs to because the league has now been expanded to twenty four clubs and somehow between now and next May the teams have to fit in forty-six league fixtures, the FA Cup, FA Vase, League Cup and County Senior Cup and in some cases some other pointless trophy or other awarded in memory of a long dead official of the league or county FA. But it’ll be okay, as long as they take one game at a time.
It is about 7.15 and the car park is filling up steadily as I turn into Coggeshall’s West Street ground. But it is to be expected, for tonight is the first home League game of the season and it’s a local derby against Stanway Rovers. Walking from my car with my step son’s wife’s stepfather (what a tangled web we weave) to the turnstiles I sneer disapprovingly at how poorly some people have parked; you could get a bus in the space that Peugeot 205 is taking up. I pay my £6 entry fee or rather my fellow step-father does; it’s his treat because I drove and spent £1.50 on a programme, which is a bit steep, but it’s very thick paper. Inside the ground I pause to admire the view and the big sign which leaves no doubt about the direction to go for refreshments.

We follow the arrow and I enjoy a pounds worth of pre-match tea; black because the milk is UHT.
The first game of the season is apparently, eagerly anticipated and I suppose I wouldn’t be here if I didn’t want to be. There is a certain thrill at seeing the pitch in pristine condition, glowing green beneath the brightening flood lights. “It’s the greenest I’ve ever seen it” I hear a bloke behind say slightly incredulously to his friend. Meanwhile a pair of middle-aged blokes carefully copy the team line-ups down into note books; I delude myself that I make them feel antediluvian by taking a photo of the team sheet on my phone. 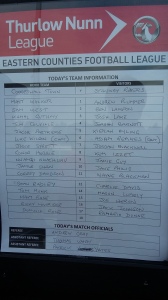 Minutes later we’ve chosen our seats in the low, black tin-roofed stand and the teams are lined up on the steps that lead down from the changing rooms to the pitch. We wait, and wait a bit more, I get the feeling they are making a bit too much out of this eager anticipation of the first game of the season, but eventually the teams stream on. Coggeshall look groovy in their customary red and black stripes with black shorts whilst Stanway wear all blue with a white shoulder and hoop around one leg of their shorts; asymmetry agogo. As the crocodiles of players cross the halfway line the Coggeshall captain gets a bit motivational and hunches his back and claps his hands, bawling something about getting going and getting there as if crossing the half way line is what they’re all about. His team mates either don’t hear him or are wrapped up in their own pre-match thoughts, they remain impassive. 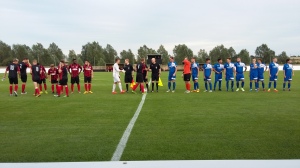 With sporting handshakes out of the way, Stanway kick off the match towards the rough car park behind the goal to my left and Coggeshall town itself. A nerdy sounding man sat at the back of the stands says how he can’t have been here since the 1980’s, adding “Goodness me” at the end of his sentence as if he has surprised himself; another obvious groundhopper tells how he caught the train to Kelvedon and walked across the fields to get here. The nerd says how he hadn’t thought of doing that. Saving us from the boredom of this overheard, statement-rich conversation Coggeshall’s number 11 scores a rather good goal. Barely 10 minutes have passed.
Stanway Rovers have a barrel chested centre forward who, according to Wikipedia “…enjoyed a six-year career with Colchester United..” Coggeshall’s number ten has a crowning hank of obviously dyed blond hair, which makes him look like a wannabe League footballer, but he has no reason to envy the Stanway man tonight, as dyed hair or not the number ten scores a second goal for the Seedgrowers after Stanway fail to clear a corner. We haven’t even been here for twenty five minutes yet.
The ball is pumped forward a bit too far for a Coggeshall forward to get a shot on the goal and someone shouts “Recycle”, which is good advice for everyone. Nearly a half hour has passed and a nifty little shimmy on the edge of the penalty area earns the space for Coggeshall’s number 9 to score his team’s third goal. Blimey. The crowd applaud politely but sadly don’t seem overly thrilled by the unfolding spectacle before them although the Stanway contingent are probably squirming, particularly the committee members in their blazers and club ties. Coggeshall’s dominance doesn’t convince the un-smiling nerd at the rear of the stand though, who two or three times speaks of Coggeshall being “unconvincing at the back” or some such “footballese” phrase. “A goal for Stanway now would put a very different complexion on the game” he opines whinily like someone wanting to be confused with John Motson. Stanway do “come on strong” towards the end of the half and have a shot that hits a goal post, but the colour and texture of the game’s skin remains unaltered.
Half-time brings applause and a stroll to the club house to buy a coffee for my accomplice and a bottle of a beer I wouldn’t normally drink (Greene King IPA) for me; £4.50 for the pair. My accomplice is very complimentary about the coffee which he thinks might not be instant but made with real coffee. For my part I wonder if the club shouldn’t source some locally brewed beer (Red Fox or Nethergate or Colchester Brewery perhaps?). 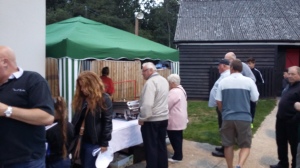 There is a summer fete feel to the refreshments tonight with the clubhouse shut, but drinks served from behind a table in the doorway and burgers dished up from inside a stripy gazebo.
The flood lights are now fully on as daylight recedes and shadows envelop the surrounding fields. A combine harvester that had flashed a yellow revolving light and thrown up dust away behind the Stanway goal in the first half has gone home to the farmyard. I flick through the programme. The title “Our History in Brief” heads a densely packed page of print; the next page in equally dense print is headed “Our History in Brief Continued”. This theme of failed brevity is repeated a page or two further on as the title “Our Club Honours at A Glance” sits above a list of 38 entries dating back to 1898. I find the programme’s half-time quiz easy; question two is “In what year was the first World Cup held?” whilst question five asks “ Which is the only club to have played in every World Cup since it started in 1930?. All ten answers are laid out in a 3-3-1-3 formation at the foot of the page with a front line of 8. Kilmarnock 9. Stanley Matthews in 1965 10. Inverness and 7. Juventus playing “in the hole” behind the strikers.
Having sated my thirst for historical facts I watch the second half, occasionally pausing to sip beer. This is the life. Ten minutes of football later Stanway concede a fourth goal as Coggeshall’s number nine turns a low cross into the Stanway goal net. Within not very long at all the Seedgrowers “go knap” as the number ten with the blond coiffure treats another low cross in the same manner. Eventually, and oddly within just a minute of scoring their fifth goal Coggeshall revert to type and show their famed inability to defend as a free-kick is met with a looping header from the barrel chested man who enjoyed a six year career at Colchester.
The remainder of the match passes in a blur of red, black, blue and green with white bits. We discuss why there no great works of art about football; I don’t think Lowry’s “Going to the match” or Peter Terson’s play “Zigger Zagger” really cut the mustard. Meanwhile the floodlights reflect off the bald head of the linesman who late on in the game makes no attempt to stifle a yawn. 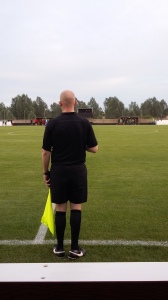 May be it was through fatigue, or perhaps he too has overheard the nerdy groundhopper’s tale of congestion on the A312. It’s academic however as at about twenty five to ten the referee Mr Andrew Gray, who the programme entreats us to respect, and we do, calls time through the medium of his whistle.
It’s been a grand evening of fine football from all the Coggeshall Town team who are worthy winners. The addition of tea, beer and coffee have just added to the fun and I will be back another day for more of the same. The season has just begun!