An evening game in Burton-On-Trent is the type of fixture which is always likely to be recalled years later as an “I was there” memory. Travelling to obscure provincial towns such as Burton, Scunthorpe or Hartlepool is one of the many joys of football, for these are the towns that one wouldn’t usually visit; they are the towns that are the butt of music hall jokes; “Burton-On-Trent? I went there once, it was closed” as Ted Rogers or some other alleged comedian might have quipped when not mentally abusing his mother-in-law.
So when I first saw the fixture list last June I instantly singled this fixture out as one not to miss. I had decided to be environmentally friendly and use the supporters bus from Ipswich (fare: £24 for the 540km round trip) and I arrive in Portman Road in good time for the 2.30 pm departure. The buses aren’t even here yet, but gradually turn up at intervals, firstly bus No2, then No4, then No1 and finally the bus I am allocated to, No3. The buses fill up with the usual weirdoes and misfits who follow the Town and about ten minutes later than advertised depart for far off Burton. The bus driver, as well as steering the vehicle would seem to have appointed himself as entertainments officer as he tries to elicit some sort of cheery response from his passengers with a cheekie-chappie routine. For once I am thankful for the taciturn nature of the average Town fan as the driver’s attempts fall on very stoney ground; this isn’t some sort of holiday trip to Magaluf, we’re going to Burton-On-Bloody-Trent for the footie. Get with the programme man.

The journey seems both tortuous and torturous with pick-ups in Newmarket and then Bury St Edmunds, so I read Johan Cruyff’s autobiography to pass the time, which only partly works, because it’s not that good. After a half-hour stop at the demi-monde that is Leicester services, although it does straddle the motorway impressively, we drive into rain and arrive on the edge of Burton at around a half past six.

East Staffordshire seems to be a land of rude-red brick buildings, canals, bridges and lush greenery. It’s still raining as I disembark from the bus and head for what my pre-trip research showed to be the nearest pub to the ground. Just a couple of minutes’ walk away The Great Northern stands at the end of terraced Wetmore Road; a basic corner-of-the-street boozer and all the better for that, it is busy with pre-football drinkers. Two pints of locally-brewed Bridge Bitter, product of the Burton Bridge Brewery go down very nicely indeed, and for only £2.90 each, a good 30 pence cheaper than the cheapest beer in Ipswich; why is beer always cheaper up north? Are malt, yeast, water and hops cheaper up here too?

Burton’s claim to fame is its beer brewing history, the result of the chemical make-up of the local water, which is high in calcium sulphate and brings out the crisp, bitterness of the hops. There was a brewing boom in Burton in the 1890’s, which coincided with agricultural depression in Suffolk due to low grain prices and many labourers left Suffolk for Burton including members of my great-grandmother’s family. Trains were laid on to transport people to Burton with the added inducement of free beer on the journey. How ironic that today it is a crime to carry alcohol on our bus between the two towns.

At about 7:25 the pub rapidly empties and the moment has come to wrench oneself away from the warmth and moreishness of the beer and head out into the evening damp. I make a detour via the club shop where an attractive lady in a smart grey suit tells me upon application that the Billy Brewer mascot doll

costs £10, and so does the Bettie Brewer doll; for some reason we both find that funny. I decide it’s the way she tells them; the Burton accent seems warm and bright; the bus driver should try it may be. I buy a programme and head for the away terrace.

Burton Albion’s Pirelli stadium sounds like it should be Turin, and the main entrance looks like a car showroom, but selling Nissan’s not Ferraris. If not a car showroom it might be a cinema or some other edge of town commercial box,

all breeze blocks and sheet metal. If it was in Italy or France a Pirelli Stadium might wittily look like a tyre and it would be architect designed. But this is England, so it’s a compromise between a B&Q and a John Lewis at Home. But that said, three sides of this ground are terracing, and terracing with a decent rake with no stanchions holding up the roof, so although the stands are small (ground capacity under 7,000) the view is pretty good, even if the tickets are £20 a go.

I walk to the end of the corridor at the back of the stand and go down on to the terrace taking up a spot in the right hand corner of the Curva Nord, or Russell Roof Tiles Stand as it is more prosaically known. Disappointingly, but not surprisingly, there is not a tile in sight on what is a tin roof, but I am close to the Burton supporters and Bettie Brewer

, the more disturbing looking half of the Burton Albion Billy and Bettie Brewer mascot partnership. The view down the pitch is a beautiful sight; lush, green, wet turf shining beneath the floodlights on sticks which in turn shine through the fine, heavy, rain. 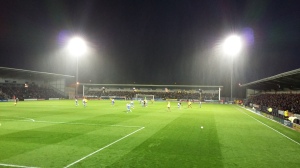 Predictably perhaps the football is not as beautiful as the setting, but there are moments of excitement as Ipswich have a ‘goal’ disallowed and there are corners and things for both teams. I however am particularly taken with the advertisement across the back of the stand behind the goal at the other end of the ground for Don Amott, ‘King of Caravans’; that’s a branch of royalty I hadn’t heard of previously and which sounds like it has roots in south Essex. But despite being a king, the King of Caravans is no Duke of York or Prince of Wales; he’s never had a pub named after him.

The first half is goalless and a young woman behind me is clearly disappointed when her date tells her that there is another 45 minutes that she must witness. I take a look at the programme (£3)

and whilst I have nothing against Lloyd Dyer I enjoy the photograph of him on page 43 in which he looks as if he might burst into tears. Half-time seems longer than usual for some reason, but eventually play resumes and at about five to nine Ipswich score a goal. Former Town player Luke ‘Reg’ Varney sending a ‘bullet’ deflection into his own net from a corner kick, although Town captain Luke Chambers seems to try and claim the goal by running off excitedly in front of the Town fans and leaping about madly. Gradually, a procession of stewards in outsized day-glo coats amble across the front of the stand to head off the somewhat unlikely possibility of a pitch invasion from the Ipswich supporters. 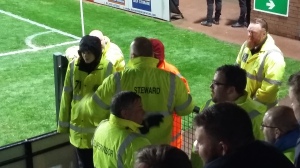 The Town fans are naturally ‘pleased as punch’ and unsportingly goad the Burtonians with chants of “How shit must you be, we’re winning away” which, whilst mildly self-deprecating isn’t original or witty having previously been sung by Birmingham and Nottingham supporters at Portman Road. Ipswich are probably the better of the two teams and just about deserve their lead, although Burton are more entertaining, with their number three looking like a tattooed hippie, or may be Roy Wood. Ipswich’s most exciting player usually, on-loan Tom Lawrence, is relatively quiet, and his World War One conscript style haircut is very dull compared to Roy Wood’s.

It’s not a great game, but it’s okay and probably the best I have seen Ipswich play this year and so they are worthy of their second goal which turns up at about twenty five past nine courtesy of Freddie Sears. Ipswich’s lead looks safe, but to make things interesting the referee awards Burton a penalty with four minutes of normal time remaining after Luke ‘Reg’ Varney collapses at the feet of Myles Kenlock. The Brewers score and I should be biting my nails with anxiety, but I’m not and don’t know if that is because of confidence or indifference, it’s probably a bit of both. If it is confidence it proves justified and after both teams almost score again, but don’t, the referee Mr Langford tells us through the medium of his whistle that it’s time to go home. Ipswich’s players make the most of a rare opportunity to lap up some applause and appreciation from their supporters and the crowd of 5236 file away in to the night.

The bus journey home is thankfully made without any stops at all and having departed Burton just before 10 pm we arrive back at Portman Road shortly after 1 am. Witnessing your team win away from home is a particular joy of football and this combined with good local beer, terraces, rain and floodlights has made this a memorable day.