It’s the 11th of March and today there is a hint that Spring is springing into life. Frogs are clambering over one another in an orgiastic frenzy of amphibious, reptile love in my garden pond and standing outside I can actually feel the warmth of the sun on my face and arms. It’s Saturday morning and life is sweet. A car ride, a train ride , a few glasses of Adnams Old Ale in the Bricklayers Arms (£3.65 a pint) and a bus ride (£2.50 return) later and I, along with my Pompey supporting wife and Jon, a Leeds United supporting neighbour who wants to know what it’s like to be amongst Pompey fans, am at the Weston Homes Out in the Middle of Nowhere Community Stadium.
On this March afternoon being in the north stand with the Pompey supporters 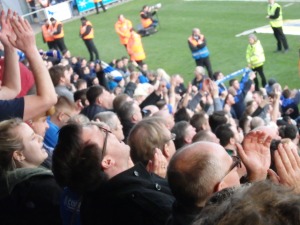 was a joyous celebration of their club, city and football. This was the first time I had ever been in a full stand at a Colchester game in their ‘new’ stadium and it was a slightly odd experience. The gate of 6,504 is Colchester’s second largest crowd of the season ( although the 7,003 v Leyton Orient was made up of loads of flippin’ kids) and easily double the number that usually attend this stadium which could readily be converted into an A12 service station should its current occupant’s ever leave. Despite having a majestic away following of some 2,200 or more, Pompeyites did not make up the majority in the stadium but it felt like they did. It seemed that Colchester supporters were in awe, struck dumb, incapable of getting behind their team. But then, they were spread about three stands when Pompey’s supporters were mostly all in just one.
Every Pompey away game in Division Four must to an extent feel like a home game because there are so many tiddly little clubs in the division, so tiddly you wonder how they manage to maintain professional football. With clubs such as Barnet, Accrington and Morecambe in the division Pompey can’t help but outnumber the supporters of a lot of them and where that isn’t the case they will almost inevitably make more noise than the home support. Going to away games is one of the great joys of being a football supporter; it’s a day out loaded with a morning full of anticipation, the excitement of arrival, followed by the shared experience of the pre-match drink with other supporters and finally getting into the stadium; and that’s all before the match even begins. Sometimes, the match beginning is where it all goes wrong if your team let you down, but it didn’t feel like there was any risk of that today. Despite a miserable performance at home last Saturday, Pompey had won away in midweek at Crawley Town (another tiddler of a club) and had at last moved into an automatic promotion position in the league table. 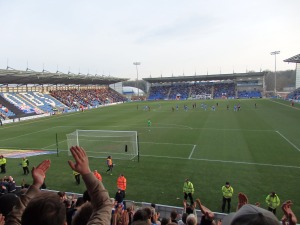 with the steep rake of the seating giving a clear line of vision all over the pitch, so there is no real reason to have to stand. But a big following of away fans are often too excited or excitable to even consider sitting down and although club stewards are charged with ensuring everyone is safely sat on their bottom, two dozen stewards are outnumbered a hundred to one and they quickly realise there is no point. A large away support is a draw for the home fans too, because even if they don’t participate themselves they can enjoy the atmosphere created by the noise and exuberance at the other end of the ground.
In terms of attracting spectators Colchester are currently on the crest of a slump with barely 3,000 turning out for the supposed ‘derby’ match against Wycombe a couple of weeks before. The sense of unfamiliarity with their surroundings must have transferred itself from those extra Colcestrians to the Colchester team because they were rubbish. Either that, or they weren’t rubbish and Pompey were absolutely brilliant; the truth surely lies somewhere in between, as it so often does.
Portsmouth scored after about twenty minutes at the Colchester end of the ground; a ‘stooping header’ of the kind favoured by very tall players one would imagine. The scorer Eoin Doyle

is probably only average height for a footballer though. You’ve got to love a ‘stooping header’, of all headers they are my favourite, although a towering header is more beautiful and for rarity value a crouching or squatting header would be worth seeing.
Once ahead, and with their oh so happy fans behind them like a fair wind, nothing could go wrong for Pompey, if the navigators amongst us had employed our sextants we would have seen that it was written in the stars. Once John Portsmouth Football Club Westwood, probably Europe’s best known football fan arrived with his drumming entourage,

the noise and encouragement for Pompey was ceaseless. Half- time was as a blessed relief for Colchester as it was for those in the stands with full bladders. ‘Down below’ the bars and the bogs were thronged and a poster on the breeze block wall of a vomitorium (look it up) thanked Pompey fans for travelling 288 miles to make their visit to day; I felt a bit of a fraud, I would only travel about 15 miles and be home before six.
Refreshed, re-focussed and re-vitalised after the half time-break, Colchester United went 2-0 down within 90 seconds of the re-start as Kyle Bennet, who had sensibly abandoned his ‘little fish’ style haircut of last week by removing its tail, completed a move which left the U’s defence in ruins. That set the pattern for the second half with waves of Portsmouth attacks crashing on the beach in front of the Pompey fans that was the Colchester goal. This was like a glorious day at the football seaside for Pompey’s fans; if the pitch had been sanded they would have made metaphorical castles of celebration and stuck little flags with the Pompey crest in the top of them.
Two more goals followed as Pompey steamed on to leave Col U in their wake. Four-nil up with twenty minutes left it looked like Pompey would score five or six. Pompey fans filled the area in front of the seats and the stewards lined the edge of the pitch and looked nervous. Mr Westwood occupied a platform at the back of the stand in the manner of Ralph Reader back in the days when FA Cup finals were wonderful, before the Premier league had him killed. In his crooked blue and white top hat and blue and white dreads Westwood blew his trumpet and waved his arms deliriously. One fan ran on the pitch when the fourth goal went in. Later the stewards somehow allowed another very large man to get over the perimeter wall and walk amongst them; as they led him away holding tightly on to his arms, he lifted his legs off the ground so they had to carry him, you could see he felt like he was king for a day; his team were 4-0 up he could do anything he wanted.
Full-time was almost a disappointment, it confirmed the result but stopped the fun; the party was over, but when I drove past the stadium the next day I could still hear the cheering… though today it was actually my wife in the passenger seat.