Oh how I love the World Cup. For a month every four years football is somehow reinvented; transformed into something more magical, intriguing, strange and joyous and I just want to wallow in it.

The World Cup is not just sixty-four football matches in a month on the telly; for the first two weeks it’s thrice daily football on the telly and this year on the first Saturday there were four matches to watch in one day. But it’s not just the overdose of football that excites, we’re not exactly short of televised football anymore; what makes the World Cup so different, so much better is that it’s a celebration and it’s all so exotic. It’s not the same-old boring diet of Premier League and Champions League that gluts the airwaves the rest of the year, with the same boring, conceited, miserable clubs playing each other over and over and over again. Some of the players are the same, but lots of them aren’t and for a month they are released from prostituting themselves for filthy TV money and they play for something higher, for the glory (okay, there have been a few exceptions, step forward Togo2006 for example).
Just the idea of Japan v Senegal, Serbia v Cost Rica, Iran v Spain, Panama v Belgium, Australia v Peru and Iceland v Argentina is thrilling; such diversity of geography , weather, indigenous wildlife, people and culture is mind boggling and it’s all united for a month by football and a desire to hear each country’s national anthem at least three times, and of course the national anthems are marvellous. The South American countries have anthems that are like mini-symphonies with an overture and then what follows is so grand and so passionate. Then there is the wonderful Russian national anthem and of course the Marseillaise, in my opinion the finest of all national anthems. If you are ever

in Marseille then I can thoroughly recommend the

museum in Rue des Arts which is devoted to the Marseillaise and its history. As the anthems play we get to see the supporters in the stand, many in fancy dress or national costume, singing and holding on to the moment.
On the pitch there are players of different creeds and cultures representing those creeds and cultures that define their country, and whilst those things are beautiful and fascinating and really matter, and each team is driven by national pride and the essence of what identifies them as a nation, at the same time these things do not matter because the World Cup is actually all about the football; football is the common language and it unites. So whilst we cannot help but be aware of all this diversity of race, beliefs, attitudes, cultures and national anthems which matter to individuals from each country, at the same time we can ignore it and get on with just playing football. This is how not being racist really works, being aware of race and respecting it but simultaneously paying no attention to it at all, so that you don’t actually notice what race a person is; we are all just people.
Enthused by the melting pot that is the World Cup therefore, when I saw a Tweet from Ipswich Town saying that the fanzone would be open for people to watch England World Cup matches on a big screen I re-Tweeted it with this comment:
“Here’s an idea, what about showing Poland’s games and Portugal’s games in the fanzone too? Not everyone in Ipswich supports England. In fact, why not show every game?”
It wasn’t long before someone Tweeted a two word response; “Terrible idea” they Tweeted, which I thought was rather rude and a bit arrogant. If you want to disagree at least explain why. A polite person would surely have begun their Tweet with “Sorry, but I do not agree that that is a good idea, for the following reasons…” Foolishly rising to the bait, I replied to the rude tweet asking in an innocent and curious tone “Why’s that then?”. The ‘answer’ to my question was soon Tweeted, although it wasn’t really an answer but rather an unnecessary question, which suggested that the other Tweeter hadn’t really read and understood my initial Tweet properly; his question was “Where would it stop?”. I replied that it wouldn’t and that the whole of the World Cup could be shown. A further reply was soon forthcoming, once again in the form of a question, but with a couple of statements at the end.
“You want the whole of the World Cup shown in a fan zone, in a sleepy suffolk town. Columbia vs Japan? Azerbaijan vs Kazakhstan? There’s just no market for it Martin.” There were plenty of things wrong with this response beyond the absence of a capital ‘S’ in Suffolk and the mis-spelling of Colombia I thought, but the final sentence of this Tweet sent this exchange of tweets hurtling into the abyss with what I can only describe as the ‘punchline’; “Lets not forget brexit means brexit” it read. Despite the missing apostrophe I was particularly amused by the use of the words “Lets not forget… ”, but nevertheless, the overall effect on me was one of disappointment and incredulity. What was this bloke on about?
I didn’t reply to the Tweet because of the whiff of xenophobic nutcase that it had released. I had however desperately wanted to reply so that I could point out that neither Azerbaijan nor Kazakhstan are in the World Cup finals, that the Tweeter had seemingly confused Ipswich with Wickham Market or Eye (sleepy Suffolk Town?) and to ask for the evidence that there was no market for showing all of the World Cup in the Portman Road fan zone. But of course mostly I wanted to know what the heck the World Cup, Colombia, Japan, Azerbaijan and Kazakhstan had to do with ‘Brexit’. In fact what does anything have to do with ‘Brexit’, a composite word for something that doesn’t exist and which to date no one can define.

At the very beginning of Simon Critchley’s book “What we think about when we think about football” he quotes nineteenth century American philosopher William James who wrote “I am sorry for the boy or girl, man or woman who has not been touched by the spell of this mysterious sensorial life…with its supreme felicity”. I know exactly what William James meant. It is so sad that people have such a blinkered, joyless perception of the world around them, that their worlds are so closed. I hope that the Tweeter I have quoted was the exception and not indicative of the general opinion of Ipswich Town fans, but later two other Tweeters ‘liked’ the “Terrible Idea“ response to my initial Tweet and I died a little inside.
But I’m alright again now, for the time being, until August when Championship football comes home to Portman Road once again. 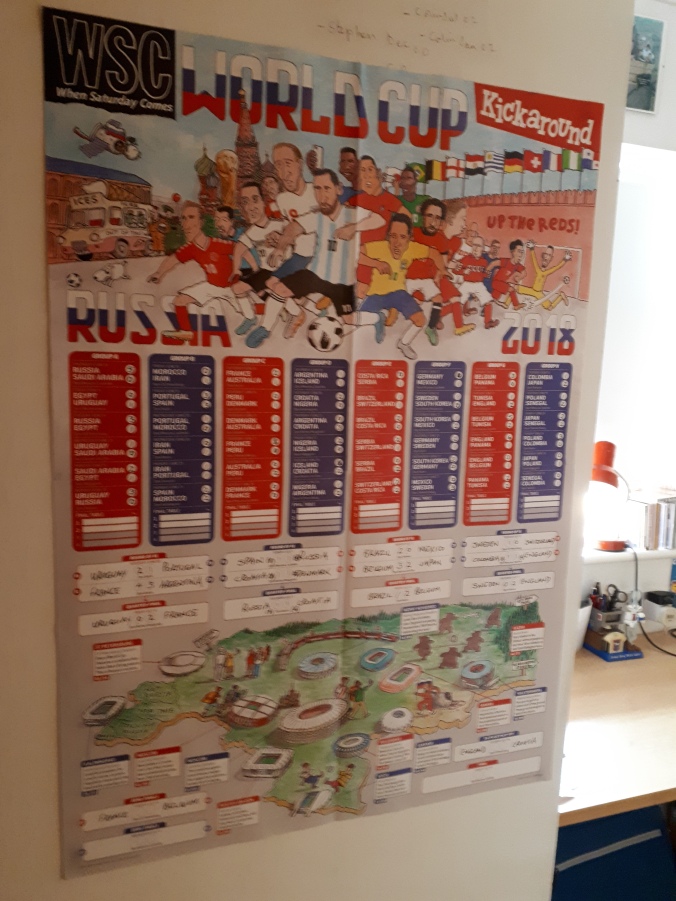